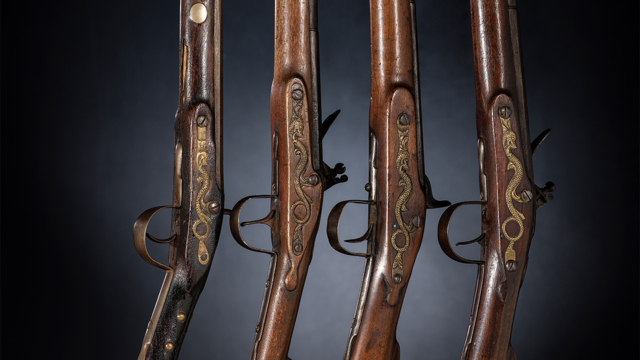 Cowan's, a Hindman Company is pleased to offer Frontier Firearms from the Lifetime Collection of Larry Ness of Yankton, South Dakota.

Assembled over the course of nearly 50 years, the collection is one of the most comprehensive offerings of Native American used and related frontier era arms to ever come to market. More than 200 lots from this landmark collection will be sold at Cowan's new Cincinnati office at 5030 Oaklawn Avenue, Cincinnati, Ohio 45227 on June 8th.

The sale contains firearms from the Battle of the Little Big Horn, including an Indian Captured 7th Cavalry US Model 1873 Trapdoor Carbine (lot #215), a Relic Colt US Model 1873 Single Action Army With Possible Reno 7th Cavalry Association (Lot #218), firearms used by the US Interior Department’s Indian (Tribal) Police (Lots #219-223), and a Winchester Model 1876 Rifle attributed to Sitting Bull (lot #226). The sale also includes an impressive array of arms made for the Indian fur trade. Rifles from  the Hudson's Bay Company and the American Fur Company and others are well represented.

Also included is a nice selection of frontier arms from the great St. Louis makers of the Western Expansion period including Hawken (Lots #158-163 and Lot #193) and Dimick (Lots #164-166).

This sale offers a rare opportunity to acquire some of the most desirable firearms from American history.

Cowan's would like to acknowledge Senior Consulting Specialist, Tim Prince, for cataloguing the Ness Collection.