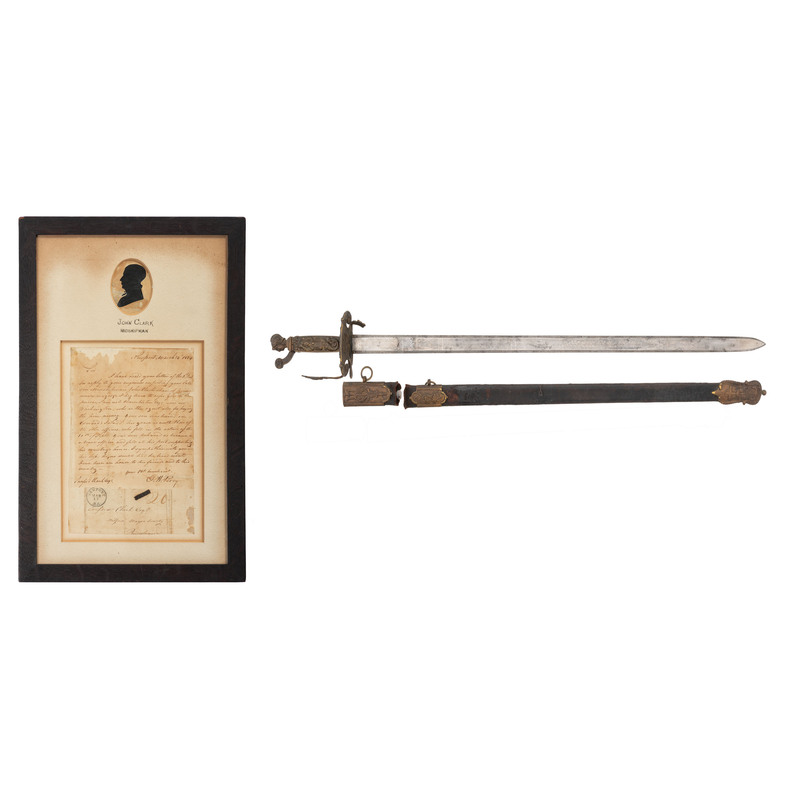 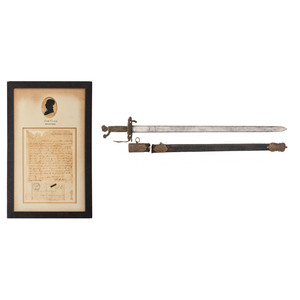 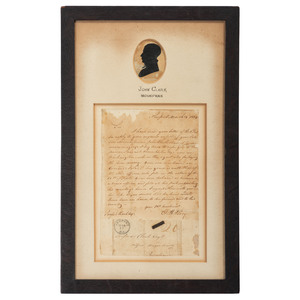 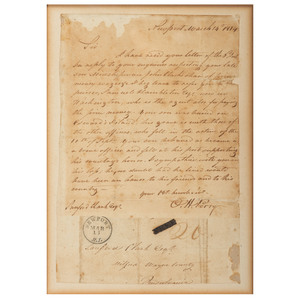 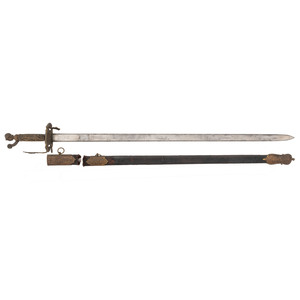 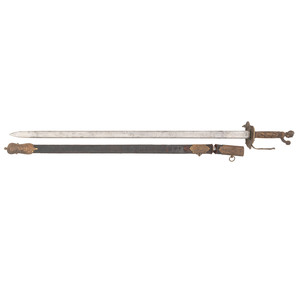 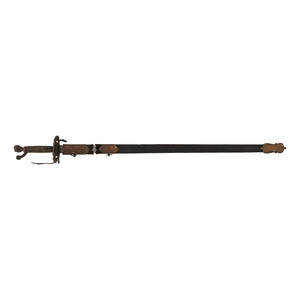 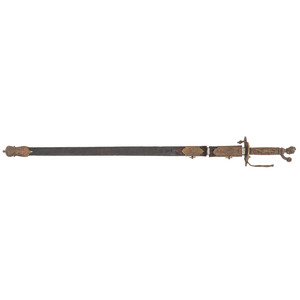 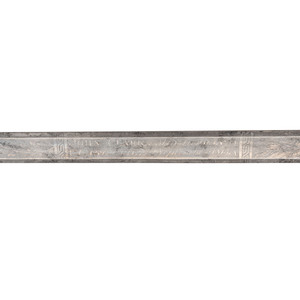 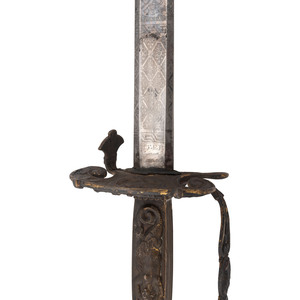 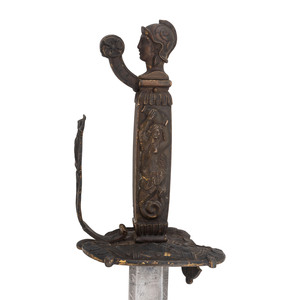 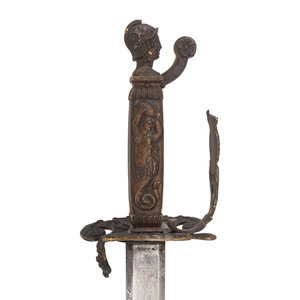 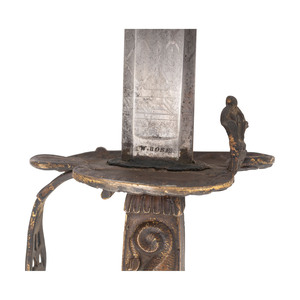 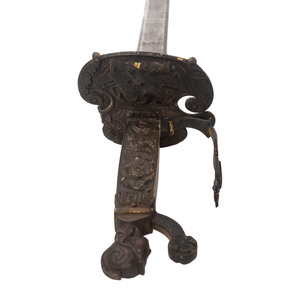 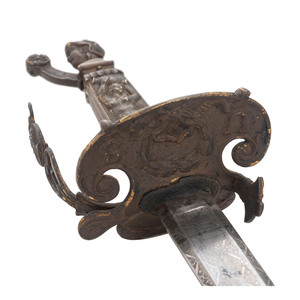 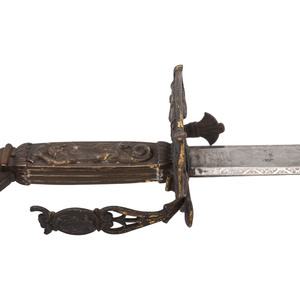 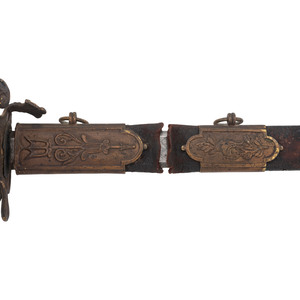 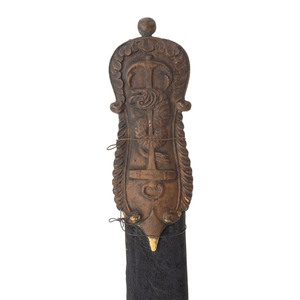 A Fine And Extremely Rare War of 1812 Presentation Sword, Commissioned By Congress And Posthumously Awarded To Midshipman John Clark, Killed In Action In The Battle Of Lake Erie, 10 September 1813 with Autograph Letter Signed from Commodore Oliver Hazard Perry.

Previously unknown and consigned by direct descendants of Midshipman Clark. This sword, together with approximately 27 others, was commissioned from the legendary Philadelphia sword maker William Rose, Sr. (1783-1856) and possibly etched by master artist William Meer for presentation to junior warrant officers who took part at the Battle of Lake Erie under the command of Commodore Oliver Hazard Perry.

The hilt and scabbard fittings are of cast, chased, and mercury-gilded brass, now black with tarnish and untouched, as-found. An unusual combination of classical and naval motifs, the cast-in-the-round bust-form pommel wears a Roman-style helmet with the rectangular grip adorned with a mermaid holding an urn in high relief. The shell guard features an eagle in relief standing on a cannon barrel before crossed flags and anchors. The reverse of the shell guard is decorated with a laurel wreath flanked by large letters “U.S.” The knuckle guard (section missing) consists of pierced acanthus branches above and below a medallion with low relief bust portrait.

The straight, double-edged blade is frost etched with four rectangular panels with stylized blossoms, trophies of arms, and the inscription: “JOHN CLARK MIDSHIPMAN / Lake Erie 10th September 1813." The other side is etched with a framed naval engagement vignette and the inscription: “Altius ibunt qui ad / summa nituntur” (He who aims highest rises highest). The maker’s name “W. ROSE” is etched at the forte. The blade retains considerable original polish with some staining and the frost etching and inscriptions are clearly visible. The black leather scabbard is in two pieces but otherwise complete with both chape and locket. The locket with a trident motif and the chape with an anchor entwined by a sea creature. A similar sword, presented to Midshipman Peleg K. Dunham is in the collection of the Metropolitan Museum of Art (2013.622a, b).

Midshipman John Clark (1793-1813) served aboard the USS Scorpion, a sloop launched during the spring of 1813 for service in the upper Great Lakes, commanded by Sailing Master Stephen Champlin and operating in Commodore Oliver Hazard Perry's squadron on Lake Erie. She saw action during the Battle of Lake Erie with the distinction of firing both the first and last shots. Midshipman Clark was one of only two men lost from the Scorpion during the battle.

Perry addresses the practicalities regarding the money owed: "I have received your letter of the 6th last. In reply to your enquiries respecting your late son Midshipman John Clark’s share of prize money, wages etc. I beg leave to refer you to the purser, Samuel Hambleton Esq. now in Washington, who is the agent also for paying the prize money."

He continues, providing details of Clark's burial and praise for his military conduct to the grieving father: "Your son was buried on Edward’s Island, his grave is with those of the other officers, who fell in the action of the 10th of Sept. Your son behaved as became a brave officer and fell at his post supporting his country’s honor, I sympathize with you in his loss, he, no doubt had he lived would have been an honor to his friends and to his country."

Sanford Clark also wrote to President Madison on 9 June 1814, requesting information on payment. A note for reply indicates that John Clark's share was $811.35. Sanford wrote again to the President on 1 January 1817, stating: "Permit me to remind your Excellancy [sic] that it is now well nigh three years since the above resolution passed the National Legislature and the same has not been carried into effect," and he notes at the top of the letter the resolution of the "Senate & House of Representatives of the United States of America in Congress assembled, that the President of the United States be requested to present a Sword to the nearest male relation of Midshipman John Clark who was slain gallantly combating the enemy in the glorious battle gained on Lake-Erie under the command of Captain Perry." (Both letters held by the National Archives, DNA: RG 45, Misc. Letters Received). Clark's persistence was gratified as the family received both their owed payment and this fine sword.

Fair to good. Blade has tarnished areas and mottled coloring overall. Scabbard is in two pieces, separated near throat in front of locket in between carrying rings. Brass hilt has some wear and tarnishing to details. Letter was not removed from frame. Appears to have small losses to edge lines, damp staining, and toning overall. Frame also has toning.

CALIFORNIA & NEW JERSEY BUYERS: Due to recent changes to California and New Jersey law, we require all firearms, whether modern or antique, be shipped to a licensed FFL dealer. Please plan accordingly.

INTERNATIONAL BUYERS: Please note that Cowan's only ships firearms to a United States address regardless of antique status. It is the responsibility of the buyer to organize the export of their firearms to their country of residence. Cost of shipping to an exporter will be included on your invoice as the shipping cost, however the cost of exporting is solely the buyer's responsibility.