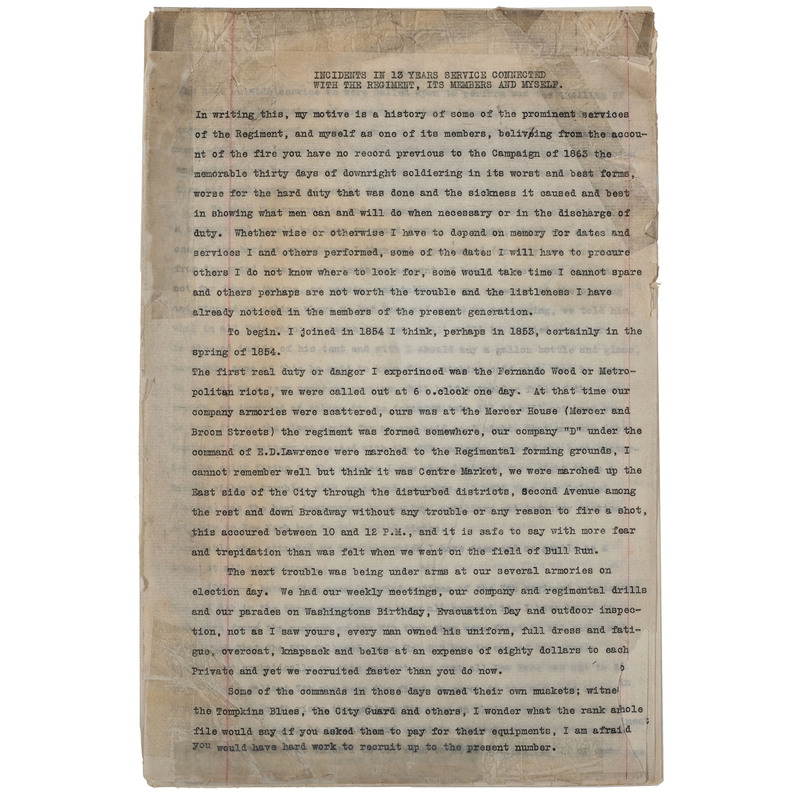 18pp, 8.5 x 13 in. sheets of "onion skin" paper. "Incidents in 13 Years Service Connected with the Regiment, its Members and Myself." Theodore A. VanTassel enlisted in the National Guard State of New York in 1854  (or maybe 1853, his memory is a bit foggy here). They became part of the NY 8th Infantry (3-month) on 23 April 1861 once war was declared. They were mustered out August 2 and reverted to a state guard unit. They mustered in again in May 1862 and out in September, then a third time in June 1863 and out just 5 weeks later. In his narrative, he also describes active duty in October 1865, after the war was pretty much over, but there was still lots of "clean up," turning in equipment, filling out paperwork, etc. being done. This unit fought at Bull Run on account of it already being formed and ready for action early in the war.

One of their first assignments was to keep the peace in heavily divided Baltimore. On a trip to town, VanTassel picked up a newspaper and realized that there were often two of everything: "I also saw two editions of the N.Y. Herald with entirely different editorials one in favor of the South and the other contrary."

They left Baltimore and moved to Arlington, there to train in the ways of the US Army. After a couple months they moved: "We marched without any event, tramping to Fairfax Court House, bringing up the rear of the column....We arrived at the Court House late in the afternoon and were treated to a sight which was new to me at least, and I think to all of our command, i.e. a City being sacked, such wanton destruction I never witnessed." He goes on to describe store contents being ransacked, letters strewn in front of the Post Office, peoples' houses being destroyed.

"We started for the front on Saturday at 12 pm, marched without a halt until 10 a.m. the first day of July 1861, when we formed line of battle and went on the field (there was no water to be had, we ate our breakfast you my say on the march, a sumpious [sic] meal of Uncle Sams Waffles), we advanced in line the shot flying around us,...[We] marched into an entrance to some grounds, we went through a gate way, or between two stone piers, which had held gates, and up quite a steep hill, our company, D, had got well into this Lane, when we received a fusilade of balls from the 14th of Brooklyn, they thinking we were Rebs and after them...Now, what do you suppose caused this serious mistake? Why carrying that flag into the battlefield, that was presented to us on the day we left New York. It was made two faced, the stars and stripes on one side, and the reverse, a white ground with an eagle in the centre. The white side was turned towards the firing regiment, and they took it for a rebel color."

"...I could see the Minnesota men amid great excitement, and firing apparently in all directions and their men falling; they were afterward reported as being very brave and they had lost a great many men &c. the fact was they had shot their own men themselves...." Much more.

An interesting and honest account of one soldier's experiences in the War between the States.