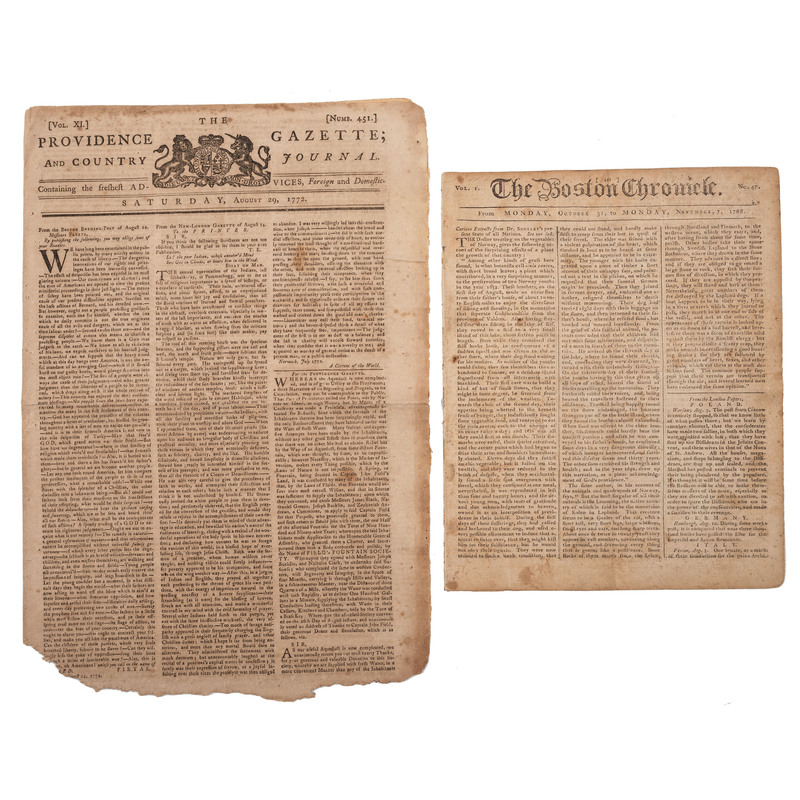 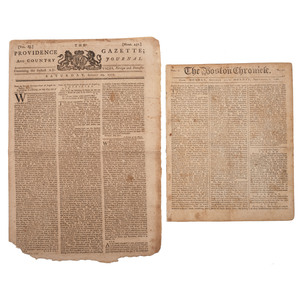 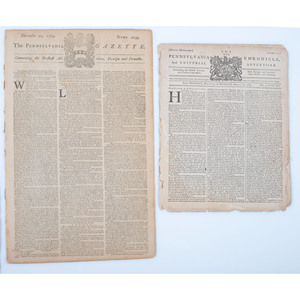 Reporting on Governor Tyron moving against the Regulators in North Carolina, where back-country dissidents, who called themselves Regulators, began to grow in numbers and boldness. In 1768 Tryon led a small militia force to put down a riot at Hillsborough, but the violence persisted. In the spring of 1771 Tryon determined to muster a full-scale expedition against the Regulators, resulting in the Battle of Alamance River: "Gov. Tyron has been here in person to command the militia attended against the Orange County Regulators; but as the people here had been informed of the intended expedition, there were not 1000 men under arms, although at other times usually mustered 17 companies or about 1900 men. When the review was over the Gov. produced an oath to be administered to all the men, the purport of which was that they would to the utmost of their power support and defend all the laws of the province. This occasioned a great murmuring amongst the men, and Capt. James Hamah told his Excellency that…he must decline taking the oath…and that his commission being at present, rendered very disagreeable to him…and he accordingly delivered it up. The men were ordered to remain on the field all night, under a fine of 5 pounds… But as few of them took the oath, the rest retired, everyone to his own home, unanimously determined not to fight against their own countrymen.” Local Boston news of a crowd celebrating a "large live oak tree...which they consecrated by the name of the Tree of Liberty."

Additional news of the response of Lord Hillsborough, Secretary of State for the Colonies: “… his Lordship acquaints the Gov. that the disposition which is appeared in the town of Boston for some time past to resist the laws, and the measures which have been taken for opposing the officers of revenue, and for intimidating the civil magistrate, have induced his Majesty to interpose his authority for their support and for this end the commanders of his forces by sea and land will be instructed when legally called upon, to give all necessary aid to the civil magistrate; and that the civil magistrate will after this be responsible for the piece of the town, and the protection of the King's officers and subjects..." His Lordship concludes by expressing his Majesty's tender wishes that his misled subjects of Massachusetts Bay may be brought back to their duty by lenient and persuasive methods and that it would be pleasing to his Majesty, to hear that the people of Boston have been such by such means to a proper sense of their duty as the doctrines and calculated Incorporated by wicked, designing and probably self-interested men, tend only to anarchy and confusion." In response to the Townshend Acts, the Massachusetts Circular Letter, written by Samuel Adams and James Otis Jr., passed the Massachusetts House of Representatives in 1768.  Lord Hillsborough, Secretary of State for the Colonies, ordered the Massachusetts General Court to revoke it. The body voted 92-17 not to do so. In response to the General Court's defiance, Governor Francis Bernard dissolved the assembly. This led to an outbreak of violence from colonists and Lord Hillsborough sent four regiments of British soldiers to Boston which arrived in October 1768.

Letter from London on affairs in America: “…The Administration...seems ashamed of what they did in repeal of the Stamp Duty and are now determined to have obedience paid all acts of parliament respecting America; for this they propose to begin at Boston, where they say lies the nest from which all the evils have sprung. It is said six regiments will be kept there, besides a number of man-of-war." Also with coverage of review of troops at the Boston Common, Sir William johnson meeting with Indians at Fort Stanwix.

Resolutions of the House of Lords on Affairs in America, with a detailed account of parliamentary proceedings in the House of Lords: “Resolved by the Lords Spiritual and Temporal in Parliament assembled, that the resolutions and proceedings of the House of Representatives of Massachusetts Bay...draw into question the power and authority of his Majesty, by and with the advice and consent of the Lords Spiritual and temporal and Commons in Parliament assembled, to make laws and statutes of sufficient force and validity, to bind the colonies and people of America, subjects to the Crown of Great Britain...in petitions which do deny or draw into question the right of parliament to impose duties and taxes upon his Majesty's subjects in America...are proceedings of the most unwarrantable and dangerous nature, calculated to inflame the minds of his Majesty's subjects in the other colonies, and into create an unlawful combinations repugnant to the laws of Great Britain and subversive of the Constitution.… It appears that the town of Boston, in the Province of Massachusetts Bay has for sometime past, been in a state of great disorder and confusion; and that the peace of the said town has at several times been disturbed by riots and tumults of a dangerous nature, in which the officers of his Majesty's revenue there have been obstructed by acts of violence...and their lives endangered...Resolved, in these circumstances the province of Massachusetts Bay, and of the town of Boston, preservation of the public peace into execution of the laws came impracticable without a military force to support and protect the civil magistrates, and the officers of his Majesty's revenue.… Resolved, that declrations, resolutions and proceedings in the town meetings of Boston, on 14 June 19 September were illegal and unconstitutional, and calculated to excite sedition and insurrection in his Majesty's province of Massachusetts Bay." Additional account of discussions in Parliament relative to America, New York celebrating the repeal of the Stamp Act, the Court-martial of Major Rogers, a meeting of the American Philosophical Society in Philadelphia. The paper also contains a notice of an escape from jail in Bucks County of three prisoners including “a negro man, named Will, about 30 years of age, 5'9" high, marked with the smallpox. Had on brown broadcloth, black breeches and rolled felt hat. $20 Reward. Includes an advertisement for an enslaved "very lively negro boy."

[Also with:] The Pennsylvania Gazette. Number 2139. Philadelphia: David Hall and William Sellers, 21 December 1769. 4pp, folio, 10 x 15 7/8 in. Disbound (toned). Reporting on "Lawlessness in the Wyoming Valley" and news from Virginia regarding a petitioning Royal proclamation permitting "copper money to be brought in, and pass in this colony," concerns over counterfeit notes, legislative reporting in the Assembly of Pennsylvania, and the appointment of William Draper as governor of South Carolina.

Providence Gazette and Country Journal. Vol. Xi, Number 451. Providence, RI: John Carter, 29 August 1772. 4pp., folio, 10 1/4 x 15 in. Disbound (toned, slight loss to lower edge). An officer accused of mistreating his slaves, kills his accuser in Pensacola, FL: “the dismal story George Harrison's death; Lieutenant Thomas, of the Artillery...quarreled with him about his negroes, whom Thomas had abused, and Thomas drawing his sword...when Harrison unsecured a stick he had, in which there was a sword, and attempted to defend himself, but he received a wound in his right shoulder and fell; the other then run him through the eye and nose; Harrison entreated him not to murder him, which instead of cooling, seemed to incense Thomas more, who with dreadful menances stabbed him to the heart." Also reporting of slave revolt in Suriname: “Captain Bogart, in 27 days from Surinam, informs us that a short time before he sailed from thence the wild negroes cut off two plantations, and killed two white men; and that was much feared, that unless succours soon arrived there from Holland, a great damage would be done." News of Indian affairs at Fort Pitt: “A party of Indians (said to be Chickasaws) entered the store of Messrs. Rumsie and Company at Caskaskys, and behaved in a very turbulent manner...upon which a scuffle ensued between them and the white people attending the store when one of the latter was murdered."

Together, 4 Colonial American newspapers from the 18th century.