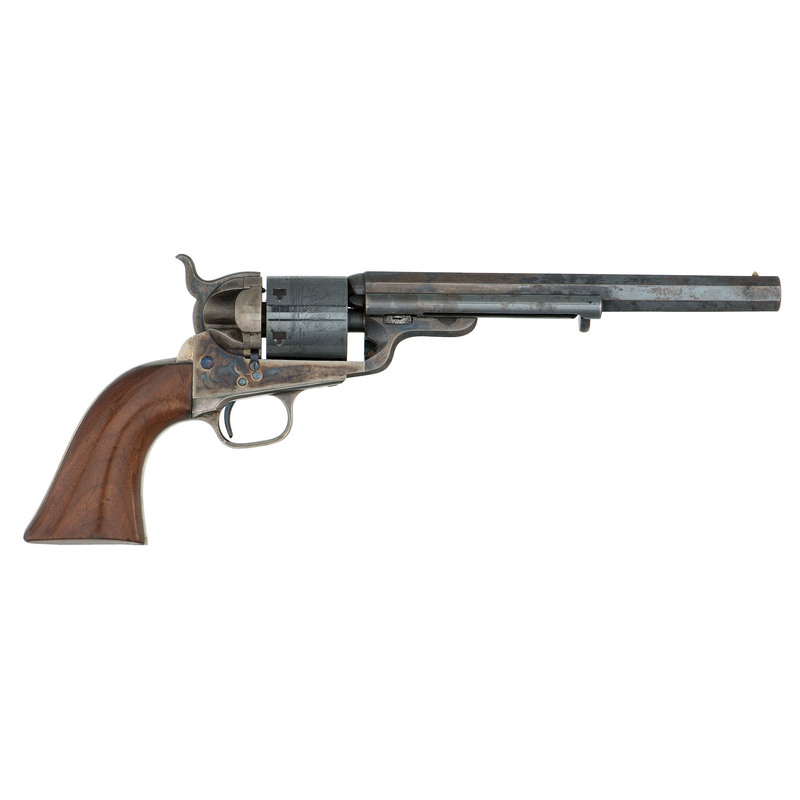 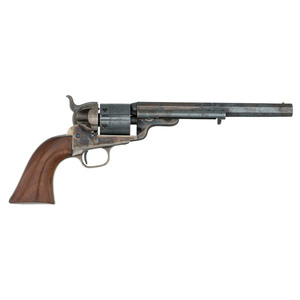 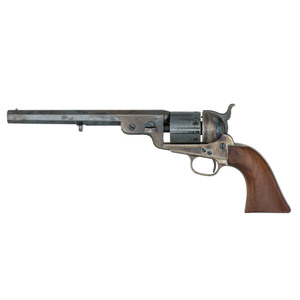 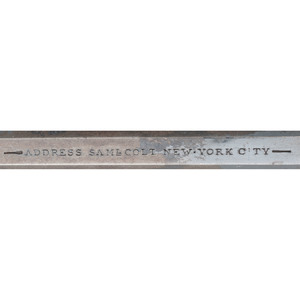 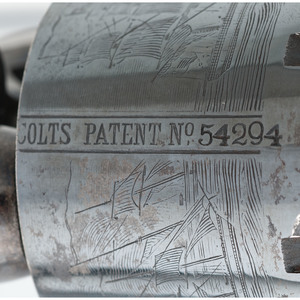 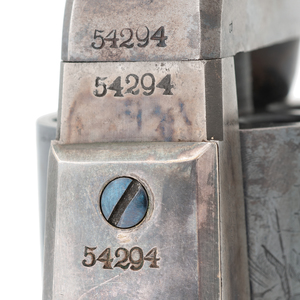 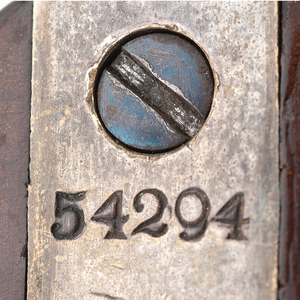 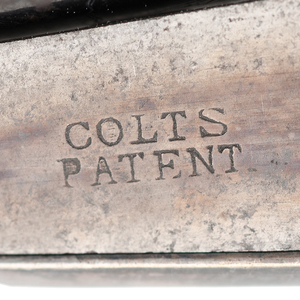 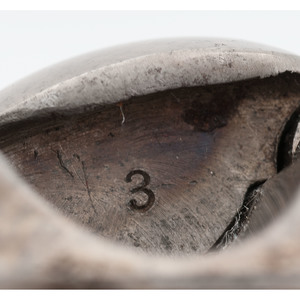 This revolver personally belonged to Rear Admiral Enoch Greenleafe Parrott, who was the Commandant at the Boston Navy Yard in 1873 when he sent this revolver to Colt to have it altered from percussion to .38 Colt. At that time, Colt was altering about 2,000 US M1851 and M1861 Colt "Navy-Navy" revolvers from percussion to metallic cartridge and many of the guns were being shipped to Colt from his station. Obviously the Admiral thought this was a worthwhile endeavor and decide to include his own personal firearms in one of the shipments to Colt. His letter to Colt regarding this transaction survives and is reprinted on page 20 of Colt Revolvers and the U.S. Navy 1865-1889 by Kenneth C. Moore. The letter is quoted in its entirety below:

I have sent, in the box of government revolvers, forwarded today, one of my own, german silver mounted, no 54294, separately enclosed. May I ask you to have it altered to fire central-fire cartridges, the same as the others, but at my expense. It is the mate to the one mentioned in my letter of the 15th ult. but not then available for sending. I enclose money order for $7. - the cost of altering the two, as given in your note of the 16th ult. Will you please send them to me, by express, when finished, without waiting for the others.

Interestingly, on that same day, and included in the same shipment of US Navy owned revolvers to Colt, was a revolver belonging to William T. Truxton, Inspector of Ordnance at the Boston Navy Yard. It appears that everyone who had a gun to send to Colt for alteration wanted to "get in on the action."

Enoch G. Parrott was born on December 10, 1814 in Portsmouth, NH. He joined the Unites States Navy as a midshipman in 1831, rising to the rank of Lieutenant in 1841. Over the next three decades, he had a somewhat storied career. In 1843, he joined Commodore Mathew Perry on the African Expedition that sought to eradicate the African slave trade. During the Mexican-American War he served on the USS Congress, a 52-gun frigate, seeing action at Guaymas and Mazatlan as well as being part of General Fremont's Monterey to Los Angels expedition. In 1861, he was promoted to the rank of Commander and was part of the force that attempted to destroy the Norfolk Navy Yard prior to the Confederate occupation of that facility. His Civil War commands included the brig USS Perry, the steamer USS Augusta, the monitor USS Canonicus, and the USS Monadnock. His major actions included the capture of the Confederate privateer Savannah, participating in the Battles of Port Royal and Fort Fisher and being part of the surrender of Charleston, SC; not to mention numerous smaller actions and confrontations both along the James River and in coastal operations. He was promoted to Captain in 1866, Commodore in 1870 and Rear Admiral in 1873, with command of the Boston Navy Yard being his last posting as he retired the following year in 1874.

Fine. Retains much of the bright blued finish with some flaking and loss, particularly on the barrel, showing some impact marks around the wedge. Cylinder with nearly all of the factory refinished blued from the conversion process and retaining the large majority of the naval engagement roll scene. Frame retains most of the vivid case color, as does the hammer. Triggerguard and backstrap retain some silver plating, which is thinning. Mechanically fine, very good bore with scattered light pitting. Grips fine with most of the varnish, showing only some scattered handling marks. A really fine condition revolver belonging to a famous Civil War era US Navy Officer.

Cowan's Auctions is one of the only houses to offer full service, in-house shipping for most purchases.

Our experts pack and ship over 5,000 purchases each year.
Shipping costs are included on every invoice to make getting your items as fast and easy as possible.
Cowan's is pleased to recommend alternate shipping options for your large or heavy purchases.
For more information, click HERE or contact shipping@cowans.com.