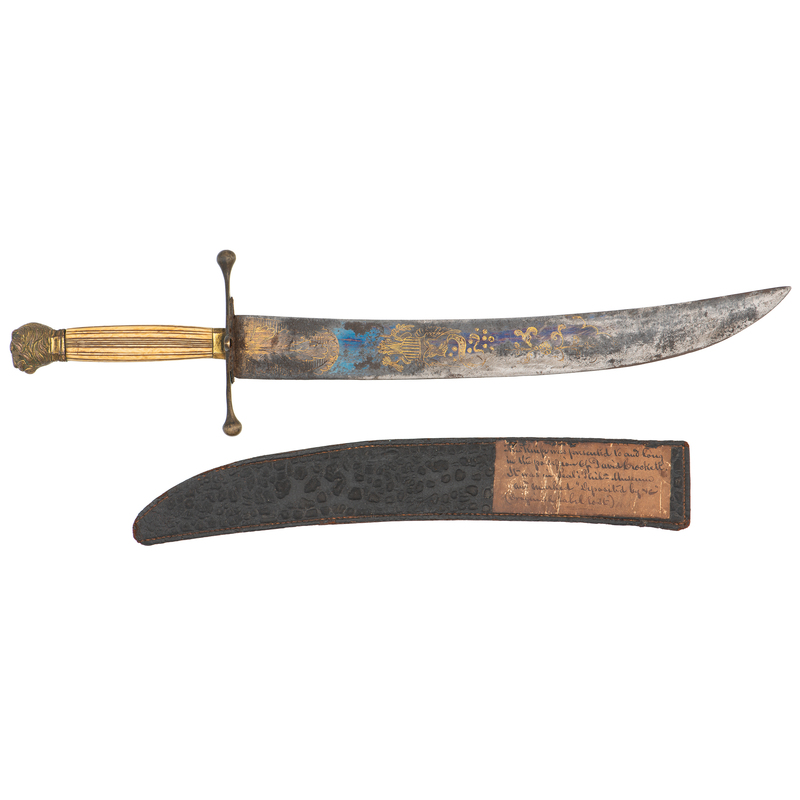 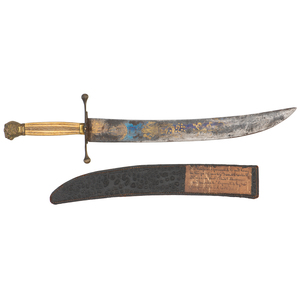 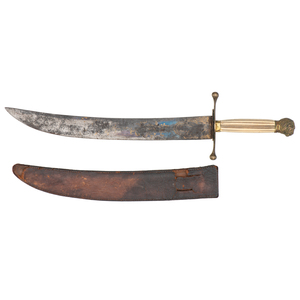 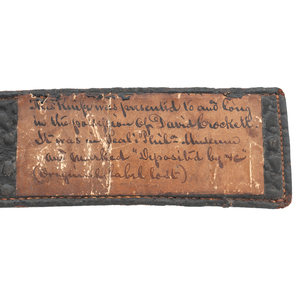 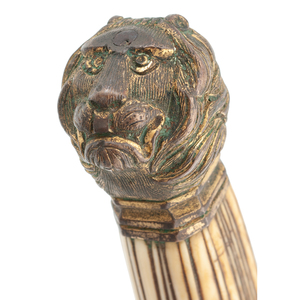 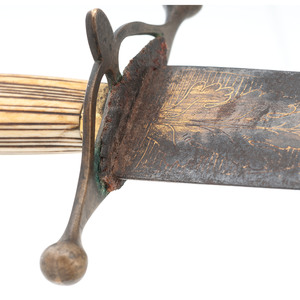 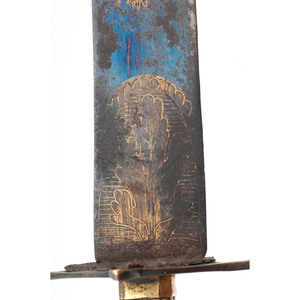 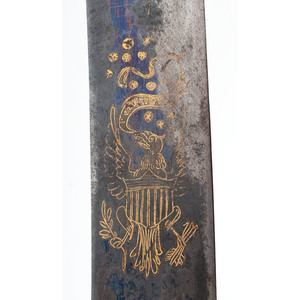 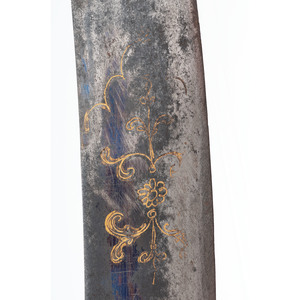 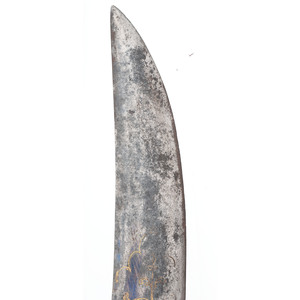 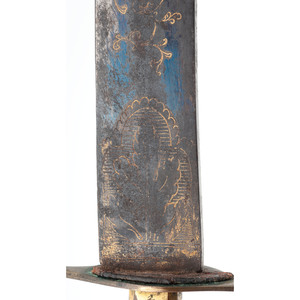 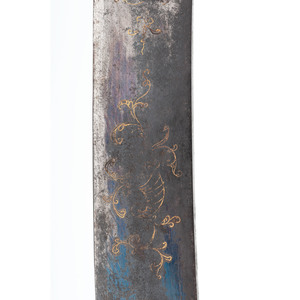 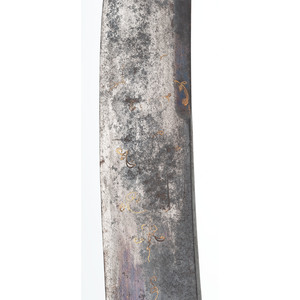 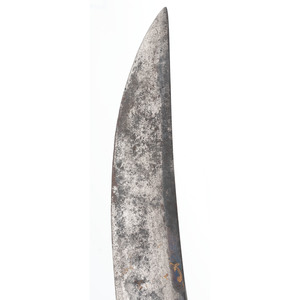 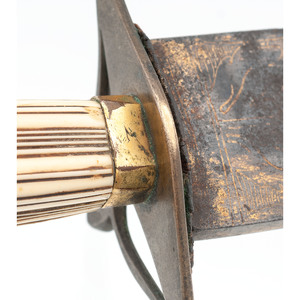 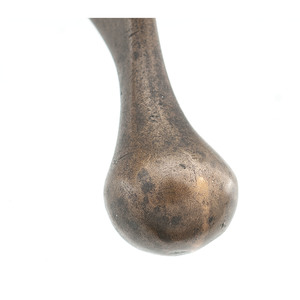 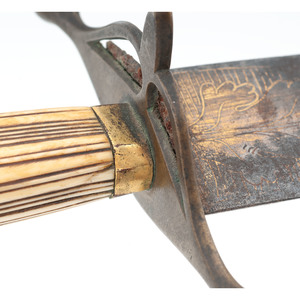 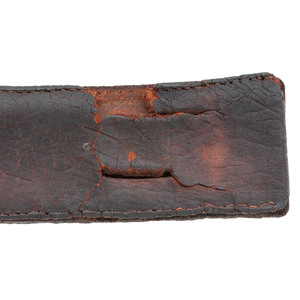 11.5" slightly curved 1.5" wide early "Bowie"-type clip point blade etched with American patriotic motifs on a blued ground with gilt highlights. Brass crossguard has counter-guard on right. Finely fluted ivory grip surmounted by a boldly rendered cast and gilt lion pommel. The scabbard made of two pieces of leather one smooth and the outside section resembles alligator hide. A 19th century paper museum-style label is glued to the scabbard near the throat. Written in 19th century black India ink the label states: "This knife was presented to and long in the possession of David Crockett.  It was in Peal's Phil(adephia) Museum and marked "Deposited by &c" (Original label lost)."

David “Davy” Crockett was revered and celebrated as a frontiersman in his own lifetime. His fame as a sharpshooter and hunter was the subject of several plays, books, and almanacs including James Kirke Paulding’s “The Lion of the West,” which premiered in April 1831.  This knife was likely presented during Crockett’s 1834 pre-election three-week congressional campaign tour of the Eastern United States.

According to the label, the knife was deposited in the “Peale’s Philadelphia Museum,” founded in 1786 by renowned American painter and illustrator Charles Wilson Peale (1741-1827).  Patronized by Thomas Jefferson and Benjamin Franklin, Peale’s museum quickly became a popular attraction. In 1794 it was moved from Peale’s home to the American Philosophical Society building, where it remained until 1802, its collections were transferred to the second floor of the Pennsylvania State House, also known as “Independence Hall.” Visitors could peruse the skeletons, fossils, taxidermies and paintings to their heart’s content, accompanied by a well-organized, printed pamphlet. Charles Peale retired in 1810, leaving the museum in the care of his sons, who opened branches in New York City and Baltimore.

Crockett and the Peale family began their relationship during Crockett’s 1834 tour. A May 1834 letter by Helen Chapman, a visitor to the Peale museum in New York City describes Crockett as being a guest of the institution. This particular branch was administered by Rembrandt Peale, a well-known painter in his own right, painting George Washington, Thomas Jefferson, Chief Justice John Marshall, and others. Crockett likely sat for the portrait of him attributed to “Peale” during his time in New York. This portrait remained in the possession of the Crockett family up to as least 1950 described by Crockett’s descendant as having been painted by Rembrandt Peale.

Crockett’s 1834 tour took him across the Eastern United States, including Baltimore, where a Peale museum was located. Crockett arrived first in Baltimore, then traveled to Philadelphia, then departed for New York. In his own account, he does not mention visiting the institution in Philadelphia or Baltimore, though he describes the New York branch as having “curiosities….above my bend.”  On his return to Philadelphia, he writes of being presented a “...gun, tomahawk, and a butcher knife…” by the “young men of Philadelphia.” At this point, references to the Crockett knife disappear.

The weapon itself is a powerful piece of evidence that it is the gift presented to Crockett. Though the blued and gilt finish as well as the eagle and star motifs suggest a Federalist Period, the pommel takes the form of a lion rather than the typical eagle. This alludes to the nickname given to Crockett in Pauldings' play nearly half a decade before his arrival to the state.

The Peale Museum operated in Philadelphia until 1841, when rising admission costs forced the closure of the institution as well as the sale of its entire collection, with the exception of the portraits. The minutes of the American Philosophical Society from 1833-1846 list no references to the knife. This indicates that the knife was personally presented to a member of the Peale family.

The knife is recorded once again in 1887, when it passed to Colonel Archibald Loudon Snowden (1835-1910). Snowden rose to public prominence through his position as a registrar for the U.S. Mint. After the Civil War, Snowden continued his political career, serving as Chief Coiner from 1866 to 1877, then he was appointed by President Rutherford B. Hayes as Postmaster of Philadelphia. Two years later he accepted the position of Director of the Philadelphia Mint, retiring in 1885 with a national reputation.

Snowden assisted in organizing of the 1887 Centennial celebration of the U.S. Constitution in Philadelphia. Serving as the Marshal and Chairman, he was responsible for the operations of the civic and industrial processional display, a grand parade celebrating the social and industrial achievement of the United States over the previous century. Snowden continued his career in politics, being named ambassador to Greece, Romania, and Serbia from 1889 to 1892, and from 1892 to 1893 as Minister to Spain.

The provenance of the Crockett knife prior to Col. Snowden’s possession is unclear. In his capacity as Marshal of the Centennial Celebration, he was in close contact with many of the organizations participating in the event, including the American Philosophical Society, by whom he was invited to an exclusive banquet attended by President Grover Cleveland.  As Marshal, Snowden presented a toast, though there is no mention in the official record of any presentations to Snowden.  Considering his position in the Constitution Centennial celebration coupled and affidavit provided by the family stating that the Crockett knife was acquired by Snowden in “approximately 1887,” it is more than likely that he was presented the knife as a token of gratitude for his service.

It has remained with the Wainwright family for 141 years.

Provenance:Was in the Wainwright Family for over 140 years

The bold lion pommel retains considerable original gilding in the protected areas. The fluted ivory grips has mellow, untouched patina. The guard is untouched with no evidence of having been cleaned. The massive "Bowie" type blade exhibits considerable original fire blue finish with gilding in the engraving. The history of the knife is well documented since its placement in the Peale Museum in the 19th century. The original leather sheath shows use and seams are loose near the throat of the scabbard. The museum-style label displays a knife belonging to a genuine American hero, a household name justly known as David "Davy" Crockett, "The King of the Wild Frontier."

Cowan's Auctions is one of the only houses to offer full service, in-house shipping for most purchases.

Our experts pack and ship over 5,000 purchases each year.
Shipping costs are included on every invoice to make getting your items as fast and easy as possible.
Cowan's is pleased to recommend alternate shipping options for your large or heavy purchases.
For more information, click HERE or contact shipping@cowans.com.