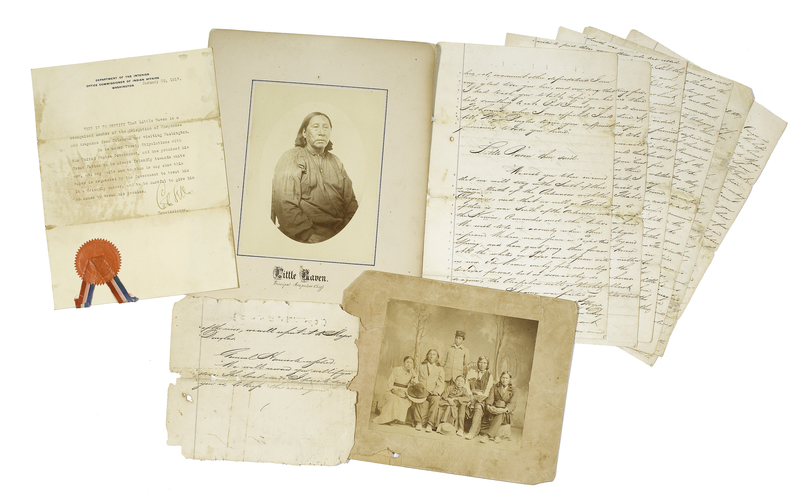 lot of 4. Includes the following: folio, 6 and a half leaves, doubled-sided manuscript 12 1/2 pp total) Fort Dodge, Kas, April 28, 1867, docketed on last sheet (partial text loss) Dept of the Mo, in the field camp w Big Coon Creek, Kas April 29, 1867 and Official Copy respectfully finished to be delivered to "Little Raven" Chief of the Arapahoes, By Command of Maj Genl Hancock, W.G. Mitchell Capt and Adj. Genl.; a 5.5 x 7.25" albumen photograph, mounted on thin cream board, with decorative blue-ruled border, and manuscript title Little Raven, Principal Chief of the Arapahoe. Not credited, but ca 1867, by Will Soule; a ca 1870s image of Little Raven and his daughter Annie; Chief Yellow Bear and his daughter Minnie, Chief Left Hand and his son Grant. This image was presumably taken during a visit made by the Arapaho chiefs' to visit their children at the Carlisle Indian School in Carlisle, Pennsylvania. Verso with printed label of F. Gutekunst Photographer, Philadelphia; and 1917 typed letter from the Department of the Interior, Commissioner of Indian Affairs, certifying the Little Raven is a recognized member of the Cheyenne and Arapaho Delegation visiting Washington, signed by the Commissioner of Indian Affairs.

An important document, this manuscript was Little Raven's personal copy of the official transcript of a discussion held between the chief and General Winfield Scott Hancock six months prior to the signing of the Medicine Lodge Creek Treaty. These negotiations, initiated by Hancock as head of the Military Department of the Missouri, were undertaken during Hancock's failed attempt to rein in the Southern Cheyenne and Kiowa south of the Arkansas River -- a campaign which was an acknowledged failure (Jamieson, 2006). Not until October 28, 1867, did the United States Government enter into a Treaty with a number of Southern Plains groups including the Cheyenne, Arapaho, Kiowa and Plains Apaches. More than 5000 Indians camped along Medicine Lodge Creek, and 500 U.S. military personnel provided protection for a peace commission led Nathaniel G. Taylor, acting as president. In separate treaties, the Government and the various tribes agreed to immediately cease hostilities; set aside a reservation for the use of the Southern Plains tribes for their exclusive use; and included various other "civilizing" articles designed to integrate the Indians into White society. The treaty was signed by a number of principals of these southern plains nations, including Little Raven, representing the Southern Arapaho. Red Cloud, as chief of the Oglala Sioux refused to participate until the Government agreed to abandon all Forts along the Bozeman Trail.

Less than a year after the signing, the treaty was broken, culminating in the August 17, 1868 massacre of more than one hundred white settlers in Kansas by Cheyenne under the leadership of Black Kettle. Later that fall, on November 27, Col. George Armstrong Custer, leading a detachment of the 7th Cavalry, attacked Black Kettle's village on the Washita River, killing more than one hundred and taking a number of women and children captive. And thus a new round of attacks by Indians and counterattacks by the Government was initiated, culminating in the disastrous 1876 defeat at the Little Big Horn.

This remarkable document -- penned by Hancock's longtime Adjutant William G. Mitchell -- records a meeting held at Fort Dodge, Kansas with Little Raven, Golden Bear, Cut Nose, and Peachy, along with several other warriors. It begins with Little Raven addressing Hancock, noting that the Arapaho ...don't stop the roads. Welcome the whites. We made peace with the Commissioners from Washington at the mouth of the Little Arkansas two years ago and that peace we have kept for two years. On the other hand, Little Raven suggested The Sioux with the north do not listen to what you General Hancock have to say. The Sioux with the north do not listen to me and, deflecting blame away from his people, noted that the Arapaho to the north are not of his nation but [t]hey are the same as the Sioux.

Hancock's turn was next, and after recognizing Little Raven as the head of the Arapaho --We like to see a tribe with one head whom the members respect so that we can talk with one responsible man.... He then entreats Little Raven to help keep the peace. He further asks for his help in enlisting Indian scouts, and tells Little Raven that he must keep the Sioux and Cheyenne off the southern plains. He warns Little Raven of the foolishness of making war with the "Great Father"...We can move in the winter as well as in the summer. Our horses are fat, when yours are poor.... He then asks for the return of a number of Government mules supposedly in the possession of Little Raven's band.

After receiving a promise from Little Raven to return the mules, Hancock then reiterates his warning We want you to keep the country quiet. But you know if the Cheyenne and Sioux come South of the river [the Arkansas], we must follow them. Recognizing that such an order was impossible to follow, Little Raven then told Hancock that his people would not camp with them [the Sioux and Cheyenne] and that his band would come to the fort when these northern bands came into Arapaho territory. Reiterating his desire for peace, Little Raven told Hancock that he would speak to his young men, but that if war broke out either south (with the Kiowa or Comanche) OR north (with the Cheyennes or Sioux) of the Arkansas his people would be forced to flee.

Finally, Hancock finished the conversation: The Indians who are at war with us are fools...The Indians are few in numbers. The whites are like grass on the plains...The last words I have to say is to keep this road quiet.

Provenance: This remarkable collection was assembled through purchase and gift by O.E. Slayton, a pharmacist in Canton, Oklahoma, ca 1900-1920. Canton was the site of the Cheyenne-Arapaho Agency. Slayton apparently acquired them directly through Little Raven's family. The collection was on loan to the Jackson County Library in Independence, Missouri in the 1950s, and was apparently featured in a newspaper article at the time [article not with the collection]. At Slayton's death the collection was purchased from his heir by Mr. Robert Benstead of Kansas City, and at his death, was inherited by his sisters, Violet Bernsted Pennington and Dorothy Bernsted of Kansas City, Missouri. Thence to the present owners by purchase and gift.

Condition:Normal folds with scattered foxing and stains to docs, images with either toning of cards or chips to same. 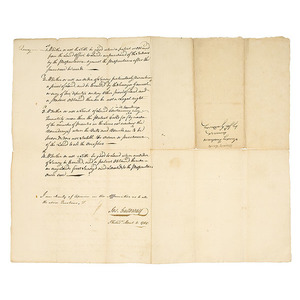