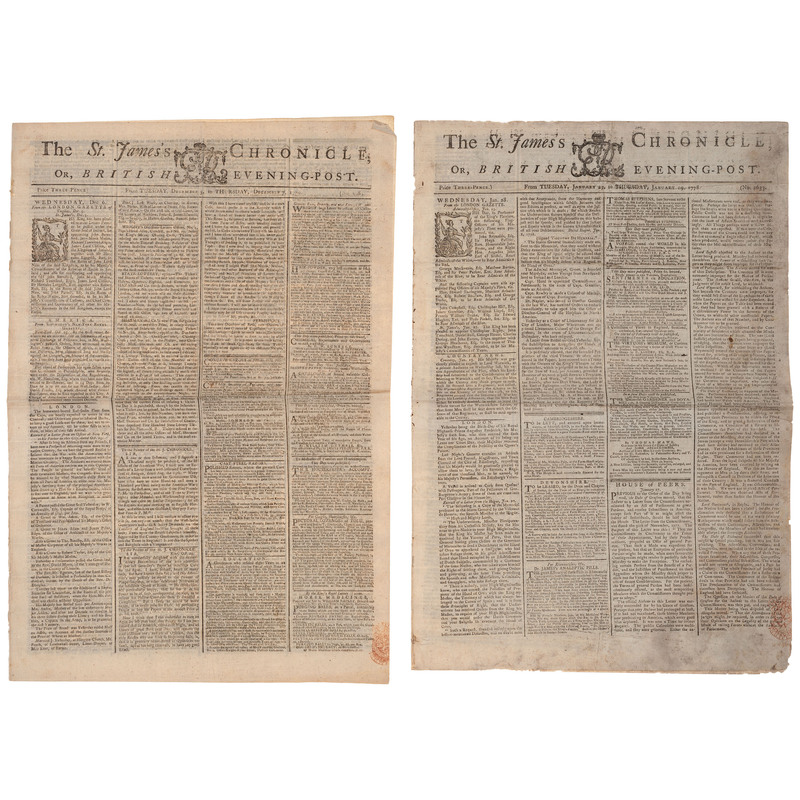 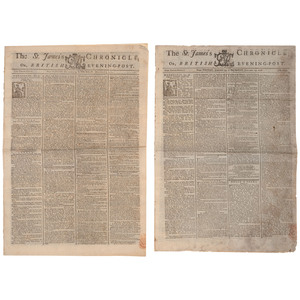 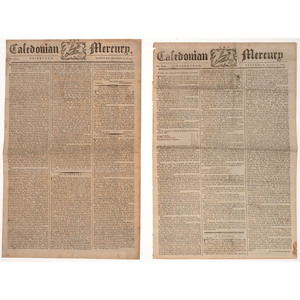 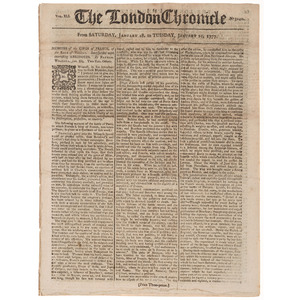 The issue features detailed accounts of the American defeat at the Battle of Trois-Rivieres (Three Rivers): “…All the transports with troops...proceeded up the river without stopping at Quebec and arrived at Three Rivers in time enough to defeat the rebels and afterwards drive them from St. John's and the posts below Lake Champlain...." Then, in small part, from a reprinted letter: "...Our enemy have already, since our arrival given us a specimen of their rashness, and total want of military knowledge. After they had abandoned Quebec, they retreated along the North shore of the river St. Laurence. Gen. Carlton with the 29th and 47th regiments, embarked immediately and sailed up the river...the troops disembarked, and also arrived by land, so that we amounted to 3000 men, besides those on board the transports; in this situation it was little imagined the rebels would be hardy enough to approach us, or...would venture to attack a superior body.... On the morning of the eighth… I was awakened with the drums beating to arms, getting out on that advice which had been received by Col. Frazier that a body of the rebels had under cover of the night, crossed the river about 9 miles above and were in full march to attack the town. The troops were under arms instantly and detachments advanced on the different avenues leading into the town. In this manner we remained in expectation of the enemy till 7 o’clock when our advance parties began to engage the enemy very close to the town. Reinforcements were sent out; but in a very short time the rebels were entirely broken and dispersed....The enemy, we now find, amounted to near 1800 men. They had, without doubt been most miserably misinformed of our numbers and situation. I am in great hopes that this blow will strike a damp on the spirits of the rebels…”

A separate segment comments on King George III's response to the war. Text of a message from Lord George Germaine to Governor Eden of Maryland: "The King being determined...to pursue the most vigorous measures for reducing his rebellious subjects in North America to obedience, and restoring legal government, has given Royal assent to the enclosed act which I commanded by his Majesty to transmit to you… I trust that when his Majesty’s deluded subjects in the associated colonies are betters apprised of the fatal consequences of the conduct that they have adopted…they will avail themselves of the means…of being restored to the king’s grace and peace, and that happy and lasting reconciliation and union will be affected….”

The Battle of Trois-Rivieres was fought on June 8, 1776. A British army under Quebec Governor Sir Guy Carleton defeated an attempt by units from the Continental Army under the command of Brigadier General William Thompson to stop a British advance up the Saint Lawrence River.

[With:] The London Chronicle. Vol. XLI, No. 3140. London. Sold by J. Wilkie, 18-21 January 1777. 8pp, quarto, 8 1/2 x 11 1/4 in. (disbound, light soil). Issue features commentary on the situation in America, and accounts detailing "quarrels which are broken out among the governing powers in America. Congress have carried no active public authority unanimously for two months...all the old jealousies between colony and colony...were also renewing very fast."

[With:] The Caledonian Mercury.  No. 9074. Edinburgh: John Robertson, 1 November 1779. 4pp, folio, 10 3/4 x 17 3/8. (disbound, partial separation at center fold, light soil). Highlighted by naval news such as "A list of ships taken or destroyed by our enemies or by accident within the space of the last five years...." Specifies ships taken by John Paul Jones naming "Serapis," the "Drake," and the "Countess of Scarborough" among others.