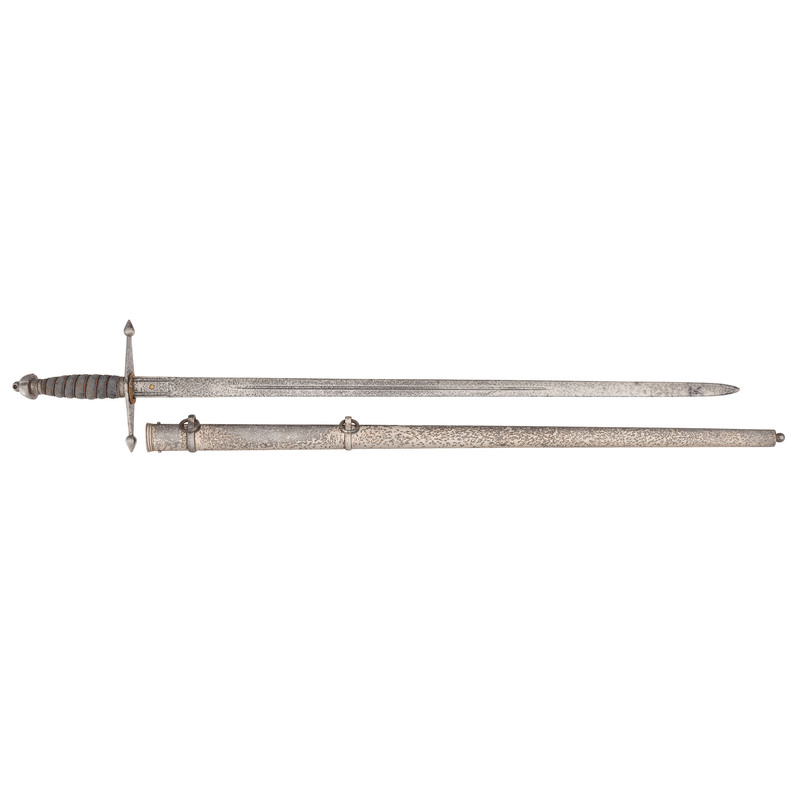 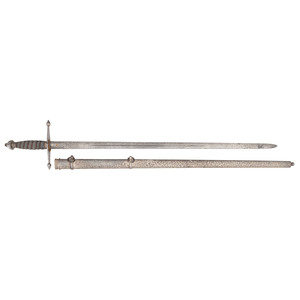 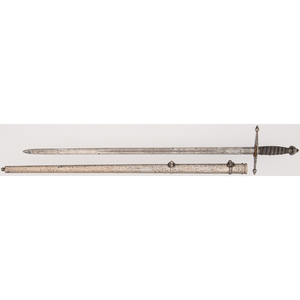 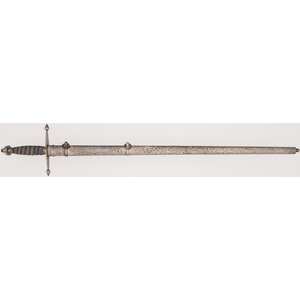 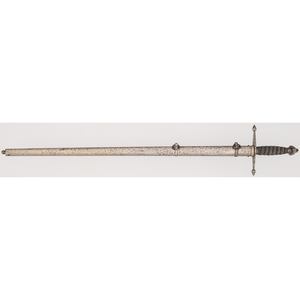 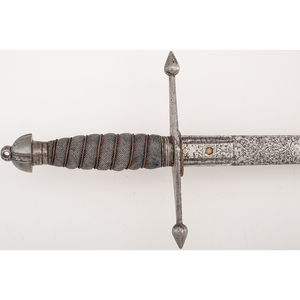 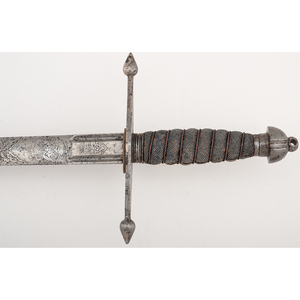 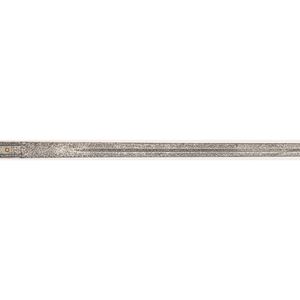 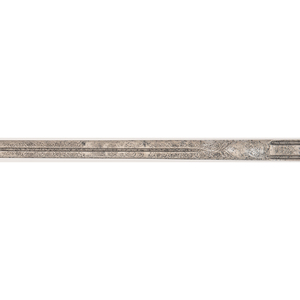 32.25" blade length. 40.5" overall with scabbard. Double edged blade with single fuller to blade and double fullers to ricassos on both sides. Steel hilt features a 7" crossguard, shark skin grip wrapped with twisted copper wiring, and a regimental steel pommel. Blade is etched with designs of thistles, crowned "Gordan Highlanders" regiment marks, "1910/C.E.A." presentee marks, and a star of David to left side ricasso. Reverse side shows etchings of thistles, a crowned (GvR) monogram, and Wilkinson-Pall Mall manufacturer marks to right ricasso. Edge of blade is marked with what appears to be a serial number "42761". Includes steel scabbard with double bands and suspension loops. Presented to Captain Charles E. Anderson in 1910 upon graduation from the Royal Military Academy.

Provenance:Born in Shanghai in 1890, Charles Edward Anderson undertook the Royal Military Academy exam in 1909 at the age of 19. After graduation he was assigned to 2nd Battalion, Gordon Highlanders. In October 1914, Anderson was assigned to D Company and departed Southampton for France of the SS Minneapolis and two days latter arrived at the Belgian port of Zeebrugge along with the 1st Battalion Grenadier Guard, 2nd Battalion Scots Guards, and 2nd Battalion Border Regiment . On the 28th of that month, while attached to the 1st Brigade South of Cheluvelt, Belgium, the regiment came under a ferocious German attack proceeded by heavy artillery fire. The attack was successfully repelled with the loss of over 100 men from the Battalion. Another attack by the battalion three days later resulted in the serious wounding of Lieutenant Anderson, who received a bullet wound to the knee joint. This action would later be known as one of the opening engagements of the First Battle of Ypres. Anderson's wound was severe, and required an extensive convalescence. Medical documents dated August, 1915, state that despite numerous treatments he was still considered unfit for general or home duty, though he received a positive prognosis. He penned numerous letters to his superiors stressing his desire to return to the men of his unit, though these were met with disappointing results. Eventually, after applying for a Adjutant position, Anderson returned to the Gordons in 1916. In July 1916, the Gordons found themselves dug in at a position near Mametz Wood, facing off against the German 2nd Army during what would be known as the Battle of Bazentin Ridge, part of the Battle of the Somme. After the loss of forward positions held by the 22nd British Infantry Brigade, the Gordons were ordered to attack and retake the village of Bazentin-le-Petit. Anderson's D Company would make up the first line of the assault, commencing at 3:30 PM on July 14th. The attack was costly for the British, as the Germans had constructed several machine gun emplacements which were used to great effect. According to documents from the British War Office, Anderson was killed on July 20th though the exact circumstances of his death are not embellished upon. He is buried in lot K. 5 of Dernancourt Communal Cemetery